Coronation night at CFHS featured a review of activities, musical entertainment, and a suspenseful crowning ceremony. 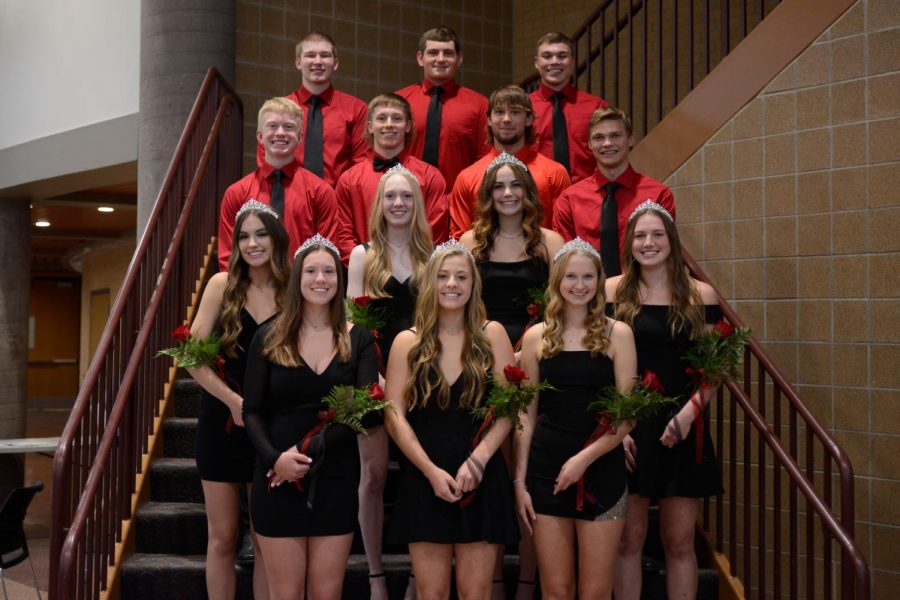 The Homecoming court poses just before the coronation ceremony

The 2021 Homecoming Coronation was held on Monday, September 20. This event was filled with music, activity information, details about upcoming events, and the crowning.

The senior class emcees, Olivia Villarreal and Preston Carlisle, welcomed everyone to the event. They introduced the senior class, led by Erika Szramek, while the class song, “Everyday” by Johnny Munson and Mario Elliot, was played. The seniors walked in and everyone cheered and applauded as they sat in the front row of the auditorium.

There were three solos at the coronation. Bianca Caputo sang the song Lover by Taylor Swift, Cannon Quade sang All of Me by John Legend, and Kendall Lawless sang the song Never Enough from The Great Showman by Benj Pasek and Justin Paul. Kathy Illa accompanied each of them on the piano.

The introduction of the foreign exchange student, Sofia “Sonya” Milkova, from Ukraine, took place as she was escorted into the auditorium by Ashton Beyer. The homecoming court was then introduced while the emcees were explaining a bit about each person. Abby Breuer was escorted by Matthew Giese, Anna Dubbels was escorted by Riley Keenen, Marguerite Holes was escorted by Colton Loeschke, Lauren Johnson by Connor Loeschke, Bree Robinson by Kendrick Otto, Josie Sullivan by Jacob Wulf, and Jaci Winchell by Beau Zimmerman.

Additionally, the sports and activities teams were recognized. Melissa Huseth, the head volleyball coach, talked about the volleyball season so far, upcoming games, and seniors on the team. Dan Meyers, the head football coach, explained the football season so far and encouraged everyone to come to the homecoming football game. Tim Langdon, the boy’s soccer coach, talked about the season’s events. Erika Szramek, the girl’s soccer coach, talked about the hard work of the girls and encouraged others who are interested to join. Morgan Kasa, the tennis captain, accompanied the coach, Karen Adel, who talked about the tennis team’s season. Brett Zimmerman, the cross country coach, gave a season recap and discussed upcoming races. Morgan Schwarz, the cheer team coach, shared what the team has done so far. Tania Legvold, the Theater Director, was not able to make it, so theater captain Kendall Lawless encouraged everyone to come to the play, Frozen Jr. Anna Dubbels, the president of Student Council, shared various upcoming events. Once each sport had discussed their season’s developments, Olivia and Preston announced who was to become queen and king.

Congratulations to Jaci Winchell and Kendrick Otto who were crowned homecoming queen and king. Tim Hodges, the school principal, stated: “I thought the homecoming coronation went really well; we haven’t had a coronation in a while. It is awesome for a bit of normality.” It was a special event for the seniors. Mathew Giese, a member of the homecoming court, concluded that “I really enjoyed spending the night with my senior class and we made so many memories.”