Both concert band and concert choir received superior ratings for their contest performances. 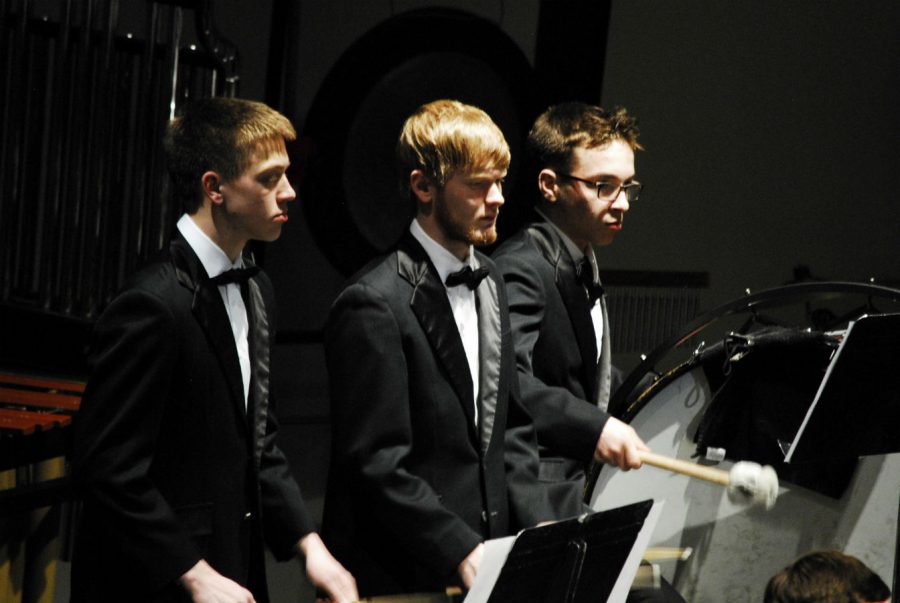 Percussionists focus on their piece during the March band concert.

On Wednesday, March 7, the band and choir participated in their large group contests. Each group had been working on their pieces for months, and finally, it all paid off. Both ensembles earned a superior rating, the highest possible score. For the band, the superior came with two 39 points out of 40 and one 38 out of 40, and the choir received a 35, 36 and 38. All of these numbers are startling considering the generally young make-up of both the band and choir. In total there are 4 seniors in band and about 7 in choir. Compare that to the 20+ freshman in each group respectively and those numbers become quite impressive.

Ben Siebenaler, a junior trombonist, stated that one of the hardest things to overcome this year was the young age of the band. “I think it had some intensity, like most years, but also a lot of doubt since it required lots of people from all age groups to really step up more. Especially in the percussion section that is dominated by freshman.” The percussion section wasn’t the only section with a large population of underclassmen however. High numbers of freshman were also seen in the flute, trombone, and trumpet section as well. Hopes are high for next year however as Siebenaler also stated, “I’m just excited to see what music we put out. It’s cool to see the limits of our band and if we were this good this year, the sky’s the limit for next year.”

Each student experiences things a little differently and for Nate Harmsen, a freshman bass player, the biggest challenge came in perfecting his part. “The hardest part about contest was getting all the little details right. We worked on our two pieces for a long time, and to see them finally work out in the end was really great.”  His hopes for next year are quite similar to others however, stating, “One thing I am looking forward to next year is our band improving and hopefully getting a better score than we did this year.”

Choir students had a whole group of other problems to face. Alex Katterjohn, a sophomore bass singer in the choir stated, “The hardest part about contest for me was making sure I was capable of hitting all the high notes. Being a bass makes it hard for me to hit some of the notes in the upper range sometimes, however, I feel that I handled it fairly well, as did everyone else.” Sadly Katterjohn will be unable to return to choir next year due to scheduling issues, but he did offer some advice to future choir students: “Be as kind as you can to Franke, she only wants the best for her choirs.”

Anna Schroeder, a senior Soprano stated that the hardest part for her was the intense pressure put on her. “We had a lot of pressure on us because last year we received a superior by one point. We wanted to do much better this year and it showed in our work ethic.” She has a positive outlook on the future of the choir program and believes in the kids coming up. Since Schroeder will be graduating next year I asked her to give some advice to her young peers. She stated, “Keep working hard and smile through the pain.”.

All in all most kids took positive experiences away from the competition and many are eager to compete again next year. Despite the generally young age of both groups, they overcame and were able to be highly successful in contest. Both programs have a promising future that is sure to be filled with many superiors to come.