Minnesota's Largest Candy Store opened its doors. But at what cost? 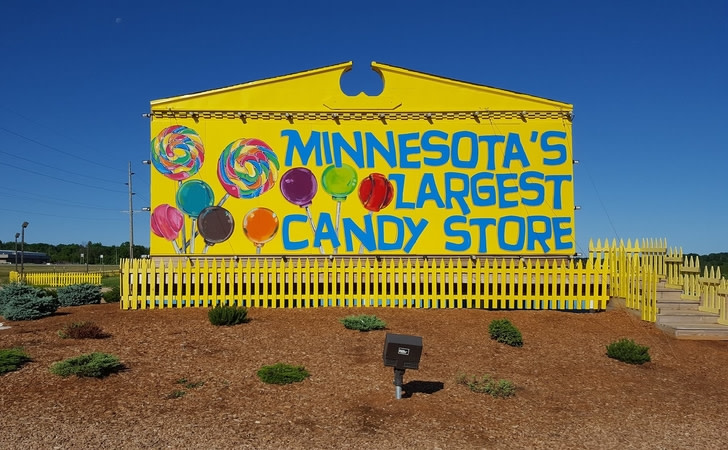 The store is known for it's humongous assortment of sweet treats.

A couple of years ago, I visited Minnesota’s Largest Candy Store in Jordan, Minnesota. Along with the rest of my family, I spent hours surrounded by what seemed like a gazillion types kinds of candy in dozens of different flavors. There were candies, even themed candies, and candies from foreign countries. Although the store was rather busy, but we didn’t mind taking our sweet time gawking at all the treats; it took us plenty of time to pick which items were worth bringing home anyway.

Like the majority of businesses all over the world, the famous candy store was temporarily shut down due to COVID-19. It recently reopened just in time for Mother’s Day. After some careful deliberation, my family decided to revisit the store on May 9th, the day the candy became available again. We found it to be an entirely different experience.

Going into the building, I knew there would be restrictions due to the pandemic— I read online that there was a 200 person limit— yet somehow, I was still astounded by the pandemic related additions to the store. As soon as I walked through the doors, I saw that there were several signs plastered around the store, asking people to social distance. I thought this was a given, but I quickly found that many people were completely ignoring these suggestions. Groups of people were getting dangerously close to my large family as they tried to pass us through narrow paths. My younger sister, Kylee An, commented on the lack of social distancing: “While we were there, I didn’t really think too much about the COVID thing since we were in a giant candy store, but it did cross my mind every once in a while when people got really close to us.” I was thankful that it wasn’t as busy as it was in the past, but it still did not seem like a safe environment.

My favorite surprise was the decor at the checkout stations. Between each lane, there was a large sheet of plexiglass. It was extremely strange to see, but at the same time, comforting. The store took several precautions in order to attempt a healthy reopening, but I was disappointed to see that the most simple safety measure were not enforced. Immediately after I noticed the plexiglass, I saw that the man ringing up our items was not wearing a mask or gloves. I understand that it is up to the customers to decide whether or not they wear a mask while in the store, but I would think employees would be instructed to, especially the ones that interact with customers. This observation was quite a let down.

While I was gawking at the enormous display of candy, I almost forgot that the world is in a strange situation at the moment. After the whole experience, and after I had some time to reflect on it, I realized that this trip was maybe not such a good idea. Not only was my family putting our health in jeopardy, but also every other customer’s health. Every single person in that building was doing just the same— a terrifying afterthought.

Despite the COVID chaos, my family enjoyed getting out of the house and spending some quality time with some quality sweets, and each other I suppose. My sisters and I scarfed down a good chunk of what we purchased on the ride home alone. Under normal circumstances, I think this is a delectable activity for families to consider; however, I am not so sure that it is worth the risk right now. An agreed and stated,“Opening that weekend was a good way to spread the virus.” Because of its popularity, Minnesota’s Largest Candy Store attracts people from all over the state and these customers may unknowingly pass germs on to others. Ultimately, I don’t think the world is ready for any businesses in the tourism industry to resume operation.