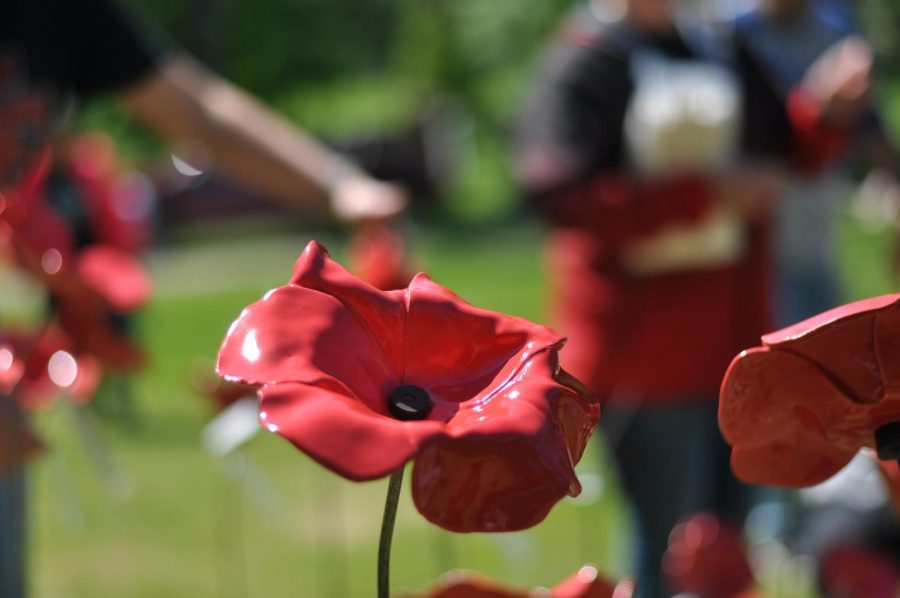 Marking the centenary of WWI’s outbreak, 2014 was a significant year for many people; especially those in European countries, where the death toll for both civilians and military members was in the hundreds of thousands. In honor of those lost, artists and volunteers worked together to create an artistic memorial at the Tower of London. Consisting of exactly 888,246 ceramic poppies placed on metal stakes then arranged and installed in the Tower of London’s moat by 21,688 volunteers, the display honored those who died in WWI as every single poppy was handmade to represent a British military fatality. The art installation was entitled “Blood Swept Lands and Seas of Red,” a title inspired by the poetry of a soldier from Derbyshire written during WWI. The artistic masterminds behind this massive display were Paul Cummins and Tom Piper. To keep the message of the memorial personal, Cummins ensured that all of the poppies were hand-made by people with a personal connection to WWI. Overseeing and helping with the actual installation of the memorial, Piper contributed to the three structural components of exhibit, including a poppy-covered metal wave arching over a bridge at the Tower of London and the “weeping window” which was composed of a metal structure covered in poppies that appeared to be spilling out of one of the tower’s windows.

In 2019, teachers at Cannon Falls High School took inspiration from the impactful memorial of poppies while putting their own spin on the project. They created 403 poppies to be placed in the Cannon Falls Cemetery for Memorial Day. Since these original 403 poppies were created to honor Cannon Falls veterans, the project has only grown. Collecting names from the Cannon Falls, St. Pius, and Urland Cemeteries, in its third year the memorial now consists of 495 poppies. Similarly to that of the Tower of London, each poppy has been hand-made, only in this case, they are hand-made by the staff volunteers of CFHS. Looking to the future, staff members hope to grow the program by taking names from even more cemeteries.

Art teacher Nicolette Hernke, who helped spearhead the memorial’s creation, has been heavily involved in the process ever since year one, and enjoys it greatly. “I look forward to getting together with colleagues and setting up the poppies every year,” she reveals, stressing that “The display of brilliant red flowers with the white tags is a sight to behold. Standing back and looking at the end results gives me a sense of community and pride, with a tinge of sadness as you see and recognize many of the names of neighbors, coworkers, family and friends.”

Though it may seem minute in comparison to the project in London, the efforts of those at CFHS in making these poppies is not to be underestimated. The process involves rolling out massive slabs of clay, using a specialized cut-out to make sure that the poppy shape is perfect every time, cutting a hole out of the center of these flower pieces, then molding the slabs to give the poppies realism. But, the process doesn’t end there. Once the flower’s body is complete, the piece must be fired in what is called a bisque firing. When the clay itself is baked at well over 1500 degrees, the piece becomes permanent; whether it be a pot, a pencil holder, or, of course, a poppy. However, the bisque-fired piece is still short one very important poppy element: its iconic fiery red color. So, every poppy is individually dipped in red glaze, left to dry, and then fired once more. This second firing, or a glaze firing, melts the glaze, which contains sand, turning it into a thin layer of brilliant red glass. This gives the poppy both its color, and protection against the elements. Seeing as every poppy is individually placed on a metal stake and then put outside, this step is crucial in preserving the finished flowers.

This year, the poppies were placed on Colvill Hill in the Cannon Falls Cemetery by dozens of staff volunteers. Each poppy was created to honor a CF veteran, and with individual name tags placed on every single poppy, it’s safe to say that this Memorial Day, families will be secure in knowing that their specific family members are both honored and remembered. And the staff are happy to do it. “Every year I get very excited to put up the poppies in honor of our Veterans. It’s a very small gesture compared to what they have sacrificed for our country,” Hernke finished, effectively summing up the sentiments of her coworkers and of the veteran’s families.