The show must go on

Although the pandemic posed numerous challenges for the Cannon Falls Theater Program, it didn't stop them from putting on a wonderful fall musical. 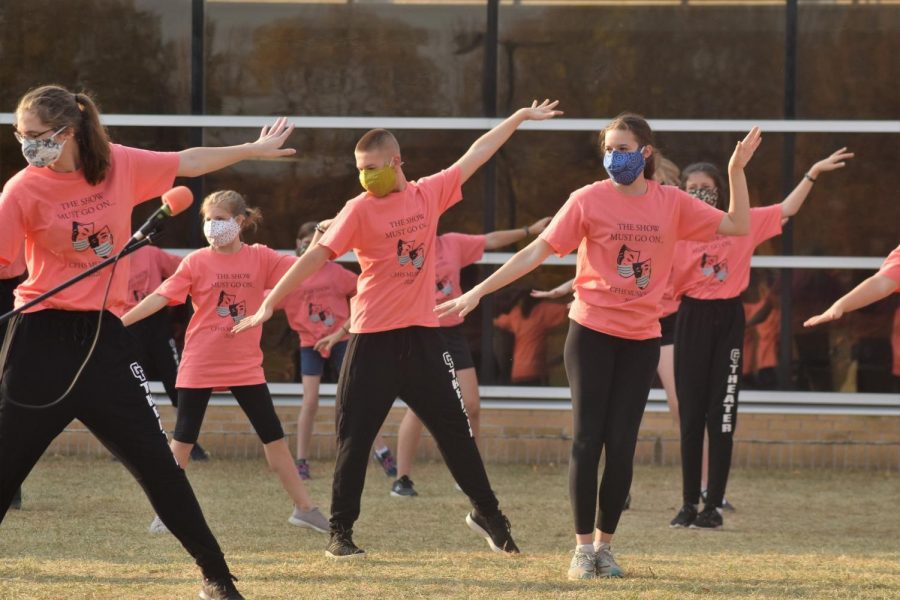 The Cannon Falls Theater Department magically pulled off an extraordinary show in the midst of a pandemic.

Americans love the intrigue of Hollywood: flashing cameras, dazzling dresses, all the latest celebrity gossip. But, what many forget is that all of our favorite movies and TV shows, even some of our favorite actors, wouldn’t be here without live theater.

Only after creating on-stage productions could producers move on to record them with the creation of film. Unfortunately, the convenience of cable TV and streaming services are quickly rendering live performances obsolete. Many people, especially students, prefer to kick back at home with a bag of microwave popcorn and knee-high fuzzy socks as opposed to paying hundreds of dollars to put on real pants, drive all the way to the theater, and spend an extended period of time sitting on what tend to be very uncomfortable fold-up chairs.

With COVID, live theater has made the switch from potentially inconvenient to potentially dangerous, and this has had a distinctive impact on the theater experience. All across the country, from New York’s iconic Broadway theaters to seasonal shows in high school gymnasiums, COVID crackdowns have prevented actors from performing in front of live audiences. This fall, the theatrical endeavors of Cannon Falls High School were no different.

But, outside comes with a whole new set of issues, especially in Minnesota. As sophomore theater veteran Teagan Strecker puts it, “It was often too cold, and sometimes too hot. There are technological challenges with playing music and properly projecting it. My biggest issue was the sun. We practiced close to sunset, so the sun was low and bright, and it was really hard to dance and smile when you were being blinded.” In addition to this, the cast had to improvise by dragging out ‘tap boards’ so that all of their fancy footwork could be heard by a widely dispersed audience.

As for complying with mask mandates, Tania Legvold, a CFHS theater director of 7 years pointed out that “Theater is a relational and interactive art, as is dance.” Partially disguising faces with stifling pieces of fabric doesn’t exactly provide actors the means to reach these ends.

Luckily, the CFHS theater department provided itself with an innovative solution to this setback by flipping the script. Instead of using a traditional musical format, they opted for a conglomeration of songs and scenes from a variety of shows, from Waitress to Hamlette.

This wasn’t without its challenges, though. With about one month to put together a show that many thought wasn’t going to happen, the theater department was forced to not only put their script together but also give the show a name. In an unconventional year, with an unconventional show, produced in an unconventional manner, the show’s name followed the pattern, and on October 9, CFHS theater gave its first showing of “The Show Must Go On (Until It’s Cancelled).”

Overall, most were happy with the finished product. Kressin Hartl, a senior actress of 7 years, summed up the sentiments of many, saying that “To be completely honest, I thought the show was going to be a train wreck, but boy was I proven wrong. I am so proud of the cast for pulling together such a beautiful performance even through all the chaos.” The show’s director, Tania Legvold, felt much the same, expressing that “Cannon Falls has some very talented kids and we were able to show many of them off.”

As for members of the audience, going to an outdoor theatrical extravaganza didn’t exactly match up with the theater experiences of years past, but it was a welcome change for some. “It was nice to be outside on a nice day,” stated Jessica Baszuro, who watched the opening performance this October. Sophomore Ava Brotake shared this thought, though both she and Baszuro would rather watch an indoor production with all of the proper microphones, lights, and seating.

Fortunately, for those who either couldn’t make it to the show, or simply didn’t love the idea of watching the show while sitting on the grass, the production was live-streamed to the school YouTube channel, a new addition to CFHS in the wake of COVID.

Overall, the CFHS department was forced to pivot this fall, and do so quickly, in order to keep their beloved tradition of a fall musical alive. High schools and professional theaters all across the country are doing the same, so maybe next time you turn on the TV, instead of watching yet another episode of Grey’s, hop online and look for a live performance from a local theater. Thanks to COVID, many are streaming performances at a discounted price, and who knows, you might just find a new favorite. At the very least, you’ll support the very business that brought this world a singing, dancing version of Alexander Hamilton.