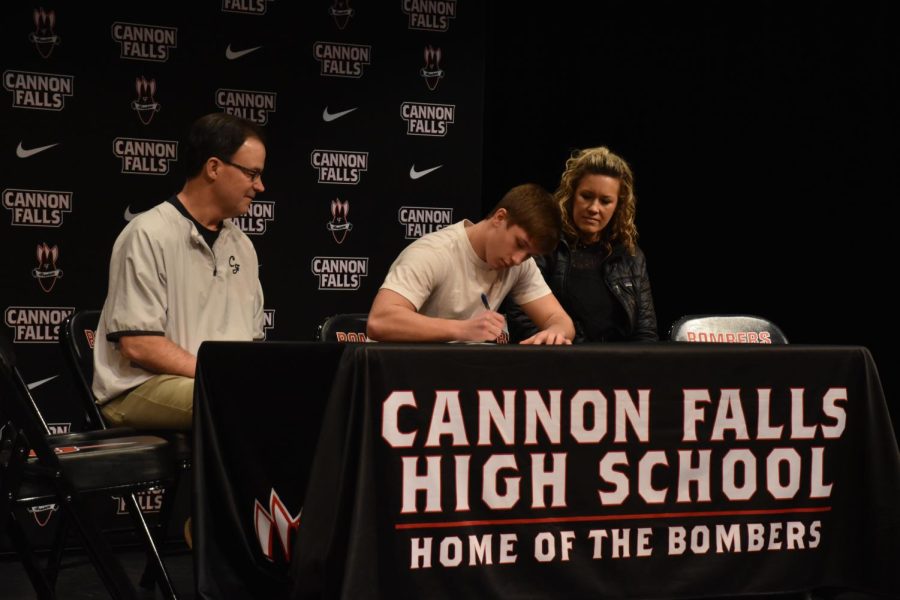 Beau Zimmerman, a senior at Cannon Falls, has committed to play baseball at the Division II level at Dakota County Technical College in Rosemount, Minnesota. Signed on Thursday, March 17th, Zimmerman will be continuing his education and furthering his skills in baseball at DCTC.

For the Cannon Falls baseball team, Zimmerman has been an essential player. He is a very versatile player for the Bombers and has played in the outfield, throughout the infield, and has pitched. He is also an aggressive hitter and a smart base runner. But, before moving on to DCTC, he will be playing his last season for the Bombers baseball team this spring along with 6 other seniors: Matthew Geise, Bailey Schact, Preston Carlise, Will Johnson, Jonny Munson, and Trenton Smith. Last year, the baseball team lost the section championship to the Belle Plaine Tigers in Gaylord, Minnesota. The team’s goal is to potentially make it farther than they did the previous year.

Zimmerman claims he chose to continue playing baseball at DCTC because of the program. “I like the baseball program because I heard it was a really good program from my coach and my peers. They were also very welcoming when I first visited,” Zimmerman confirms. “But, I picked DCTC in general because it’s close to home and they are a Division II college,” he said. On the DCTC baseball team, Zimmerman shared he will be playing somewhere in the infield. “Although I haven’t decided exactly where yet, I’m most likely going to be either pitching or playing this base,” he said.

While at DCTC, Zimmerman will be studying to someday have a career in Heating, ventilation, and air conditioning (HVAC). As a technical school, DCTC was a simple choice for Zimmerman because he can get his education and start working in as little as two years. However, any schooling can take longer as a student athlete.

With a good baseball program at the Division II level and good schooling for his future career, Dakota County Technical College was an easy decision for Zimmerman. Overall, he is very excited for what the future holds.