On the court, Drew Otte, Luke Sjoquist, and Rhett Schaeffer, were chosen. 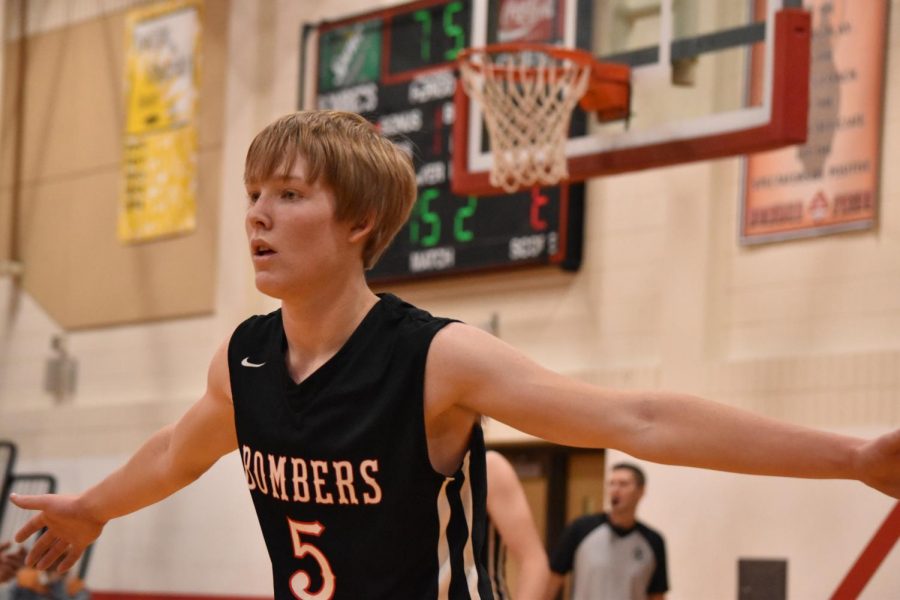 This season, Bombers small forward and team captain, Drew Otte, was on a mission. “My stats from last year to this year went up in points and rebounds,”Otte noted. Otte finished the season averaging 15.1 points, 7 rebounds, and 1.6 assists per game. Finishing the season with the second highest points per game average for the Bombers, Otte was a formidable force in the Cannon Falls offense. With a season high of 31 points and 15 rebounds, Otte wasn’t only known for his scoring, but was also known for his success on crashing the boards and picking up the loose ball. Not only did he receive recognition for his talent from his coaches and teammates, but also from coaches and players from around the Hiawatha Valley League. “The work I put in this offseason allowed for me to gain recognition from other coaches,” he said. When asked why he believed he was chosen as an All Conference selection, he said, “My role as a captain and a leader on and off the court helped me reach this point.” Sadly, Otte is hanging up his sneakers and will not continue his basketball career at the collegiate level. Going forward off of the court, Otte is bound to uphold the same leadership qualities.

My role as a captain and a leader on and off the court helped me reach this point.”

Bombers shooting guard, Luke Sjoquist, had his eyes on the prize coming into the 2019-20 season. Coming off of an amazing junior season, Sjoquist was ready to show that he had only gotten better over the offseason. “I think what led me to All Conference was my work in the offseason,” Luke asserted. Refining his skills in Amateur Athletic Union leagues (AAU) and summer leagues, Sjoquist was working hard to leave a mark on the hardwood during his senior season of high school basketball. Needless to say, that goal was accomplished. Averaging 15.6 points , 3 rebounds, and 1.6 assists per game, Sjoquist was a well-rounded facilitator for the Bombers offense. Not only was he great on the offensive side, but he was an animal on the defensive side, leading his team with an average of 1.6 steals per game. Sjoquist was determined to keep his energy from the offseason as the season rolled around, without faltering. “I needed to carry that over to the regular season and perform well,” he said.  After receiving offers from Concordia-Moorehead, Northland, RCTC, Crown College, and Minnesota State Tech, Sjoquist has not decided on what he is going to do after high school. Sjoquist will leave Cannon Falls as one of the most prominent players in recent memory.

Coming into the final season of his high school career, Bombers point guard, Rhett Schaeffer, was looking to bring his team to a Hiawatha Valley League title. Being the team’s main playmaker, Schaeffer led the team in assists with 6.8 per game, which is nearly half of the team’s average assists per game. Along with passing, Schaeffer was an excellent scorer and rebounder, averaging 9.5 points and 3.9 rebounds per game. Along with his great offensive play, Schaeffer loved to swipe the ball from the opposing team. Schaeffer averaged 1.7 steals per game, which was the second highest tally on the Bombers team. In his final season, not only did Schaeffer earn an All Conference selection, but he set a new school record for assists in a single season. Schaeffer passed the ball for an automatic score a staggering 186 times, which led him to the number one spot on the team with ease. This barbaric season of play-making also led him to third place on the all time assists leaderboard with a total of 295 in his career. Unfortunately, the pass first point guard will not wow any more spectators as he has opted not to continue playing ball in college. Schaeffer will leave Cannon Falls as one of the finest examples of an unselfish player who put his team before himself.