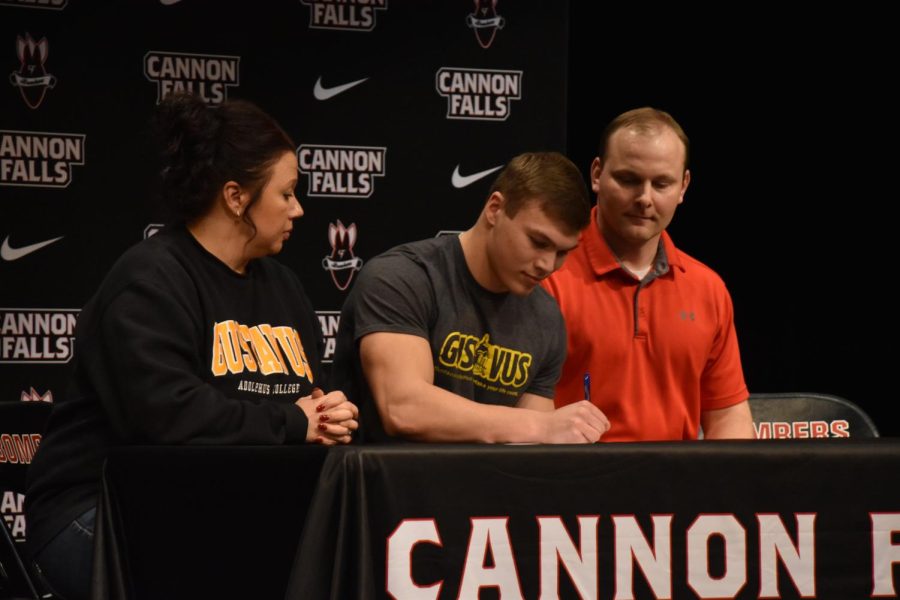 With his mom and coach by his side, Loeschke signs the papers to play football in college.

Colton Loeschke has signed to play football for Gustavus Adolphus.

Loeschke helped the Bomber Football Team in becoming Section Champions in 2019, District Champions in 2019, 2020, and 2021. He was also an MSHSL State Football Participant in 2019. Along with team accomplishments during his football career, Loeschke was also awarded individual honors such as being named All-District Honorable Mention in 2020 and Academic All-State and All-District in 2021. Loeschke had the privilege of being a captain this year, where he helped set examples for the underclassmen and continued to be a leader.

Loeschke declares he chose Gustavus because the coaches had reached out to him, in hopes that he would play football for them. He mentioned that they also “seemed interested in him as a player and as a student.” Gustavus also has his intended major, exercise physiology, and the Army Reserve Officers’ Training Corps (ROTC). In the future, he would like to enroll in graduate school for occupational therapy and someday work with veterans.

Loeschke has been enlisted in the National Guard since May 7, 2021, which has been over a year now. During his time at Gustavus, he plans to attend ROTC classes and training exercises. This summer towards the end of June, Loeschke will leave for basic training. As soon as he gets back, which will be around the middle of August, he will go straight to Gustavus.

The football season at Gustavus will start on August 16 and that is when he will start training as a linebacker for the Gustie team. In high school, Loeschke was a running back and a rover, which is a hybrid safety/linebacker position.

Loeschke says that he will miss a few friends in Cannon Falls, but he is honestly ready for a fresh start. He is very excited to meet new people and start the next chapter of his life.