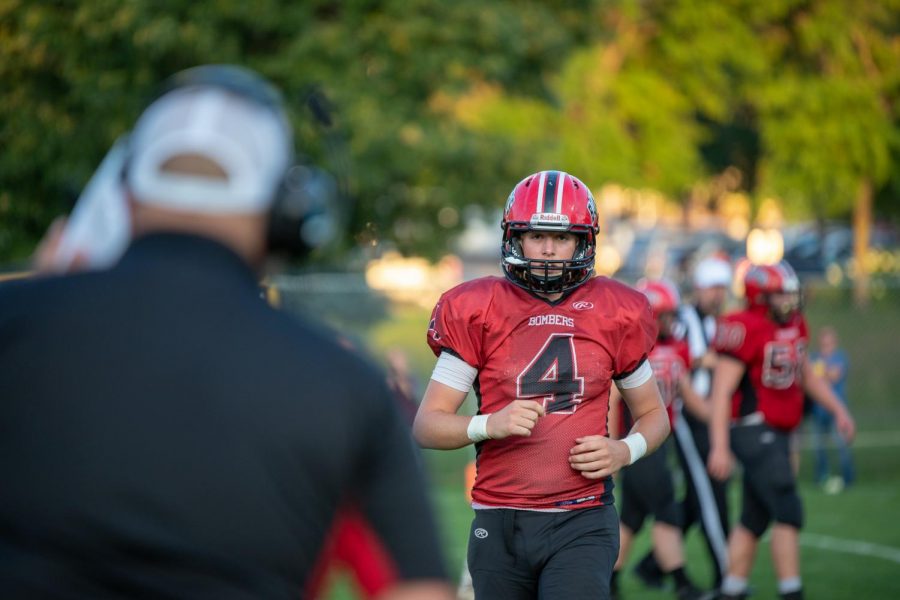 Jack Dommeyer was one of the Bomber football players who was selected.

Bombers lead running back, Trenton Matthies, was the team’s glue in his All Conference senior season. With an abundance of school records and a very impressive stat sheet, Matthies was one of the best running backs Cannon Falls has seen. Gaining 1,348 yards on 141 attempts (an average of 9.6 yards per carry), Matthies was the team’s spark plug on offense. Not only did he shine in the yards department, but he also scored a staggering 17 rushing touchdowns. These impressive numbers led him to the leaderboards in seven different categories on the stats sheet. When asked why he believed he was selected for All Conference, he stated that, “my leadership and all the hard work I put in throughout the year got me an All Conference spot.” Matthies was recruited by the College of St. Scholastica and will continue his football career as a Saint.

Bombers senior quarterback and defensive end, Jack Dommeyer, was one of the best athletes Cannon Falls has seen in recent years. Dommeyer accomplished the All Conference feat in an offense that starred the running backs over quarterbacks and receivers, which is a very impressive accomplishment. Throwing for 313 yards and 5 touchdowns, Dommeyer was a reliable quarterback in the Bombers’ run-first offense. Not only did Dommeyer change the game on the offensive side, but he was a monster on the other side of the football. Dommeyer made the all-time leaderboard in three defensive categories during his senior season. He became fourth in sacks in a single game with 3.5, third in sacks in a season with 7.5, and third in career sacks with 11.5. The blitzing presence of Dommeyer was a scary sight for opposing offensive tackles. Being such a versatile player, Dommeyer was able to play offensive and defensive snaps for almost the entirety of every game of the season. He was always part of the action, rarely on the sidelines. His pure athleticism led him to 335 rushing yards and four rushing touchdowns as a quarterback. Sadly, Dommeyer will not be playing football in college, but he leaves Cannon Falls as one of the best hybrid players that the program has ever seen.

I am an aggressive player.”

Coming into his senior season, Bombers running back and linebacker, Mason Duden, wanted to prove himself and leave his mark on the field. After a shoulder injury early in the season, Duden’s offensive play was cut short. Although his injury held him back on offense, he still wreaked havoc on  opposing teams. Leading the team with 86 tackles, Duden was an elite defender. Along with these tackles, he also managed 2.5 sacks, 3.5 tackles for loss, and capped it off with a defensive touchdown. “I am an aggressive player,” Duden shared. “I didn’t care what happened to me as long as I was hitting the other guy as hard as I could,” he added. Duden’s style of play ultimately led him to an All Conference selection. After an injury riddled high school career, Duden was never able to play up to his full potential; however, he still made a massive impact when he was on the field. Despite his hardships, Duden leaves the team as the seventh most prolific tackler in Cannon Falls football history.

Bombers running back and safety, Kade Holt, was a menace on both sides of the football for his senior season. An All Conference selection for Holt was in the making from the first snap of the season. On offense, Holt gained 435 yards on 67 attempts while adding on two touchdowns. Being the second choice running back behind Trenton Matthies, Holt made the most of his opportunities on offense. On defense, Holt was roving the field for most plays, looking for balls to intercept or receivers to tackle. Holt made 47 tackles, two interceptions, one fumble recovery, and even blocked two kick attempts. When asked why he believed he was selected as an All Conference player, he credited it to his defensive leadership and his hard work day in and day out. Holt arguably leaves the 2019-20 season as the best hybrid player on the team and will hang up his cleats knowing that he left it all on the field.

In his final season in a Bombers jersey, offensive and defensive tackle, Jacob Hall, was his quarterback’s blind side dream and the opposing quarterback’s blind side nightmare. Holding his own on the exterior of the offensive line, Hall was the primary protection for fellow All Conference recipient, Quarterback Jack Dommeyer. When asked why he believed he was selected as an All Conference player, Hall felt his hard work in the weight room and his energy at every practice were major parts of what won him the recognition. Hall was especially dominant on the interior of the defensive line. Leading the charge on the defensive line, he racked up the most tackles with 41, while also adding five sacks, 6.5 tackles for loss, two fumble recoveries, and two passes knocked down. As Hall’s days in the red and black end, he hangs up his jersey on his football career to pursue a job in the trades.