Students explore the detrimental effects vaping can have on high school students. 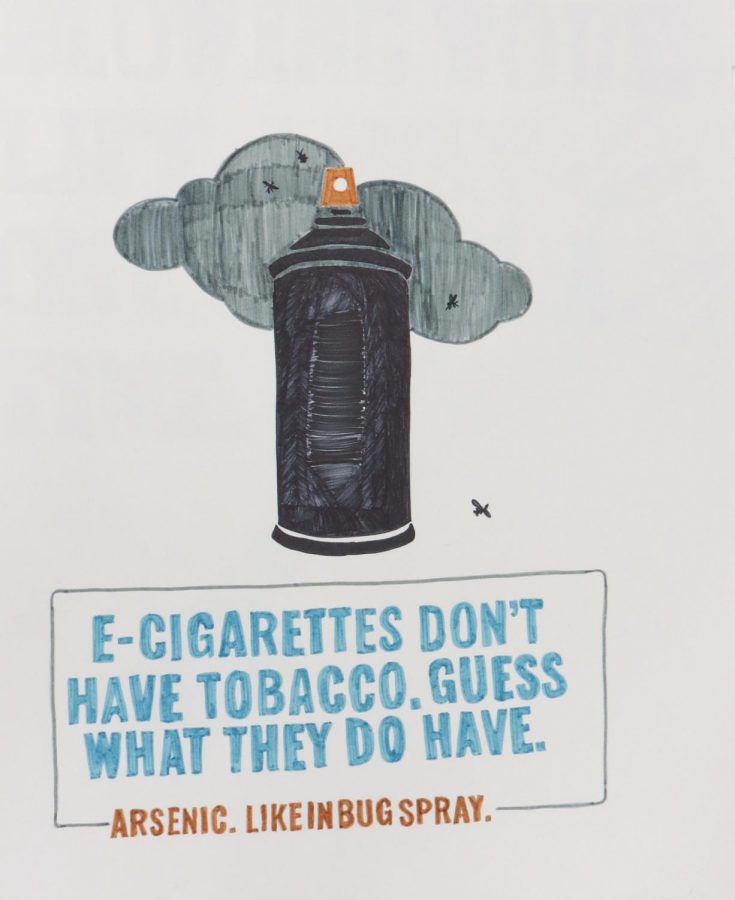 flavors which are more directed towards kids and young adults”

Who wouldn’t want an increased chance of lung cancer, stroke, cardiovascular disease, COPD, harm to almost every organ, and death? E-cigarettes were originally created as a replacement for smoking in order to lessen many health risks. Cigarettes are filled with both nicotine and tobacco while electronic cigarettes do not use tobacco but instead are filled with nicotine and other electronic juices and flavorings. By converting the liquid inside it to vapor by heating up the juices and water inside, e-cigarettes have been taken up by many adults as a smoking alternative. However, youth have started using this practice known as vaping as well. Vaping for kids is very different than vaping for adults. Vaping devices started out with a look that was similar to a cigarette, but they have now morphed into many shapes and sizes as well as flavors which are more directed towards kids and young adults. This is causing serious issues because youth are more willing to try these vape devices. The other issue with this is that vapes are still very addictive. When a person vapes, they still consume the same amount of nicotine as they would in a regular cigarette, but people are able to adjust and heighten the amounts of nicotine in a single vape until the amounts can cause a high. What started out as way to lessen the harmful effects of smoking has spiraled out of control and gotten many teens and young adults hooked. 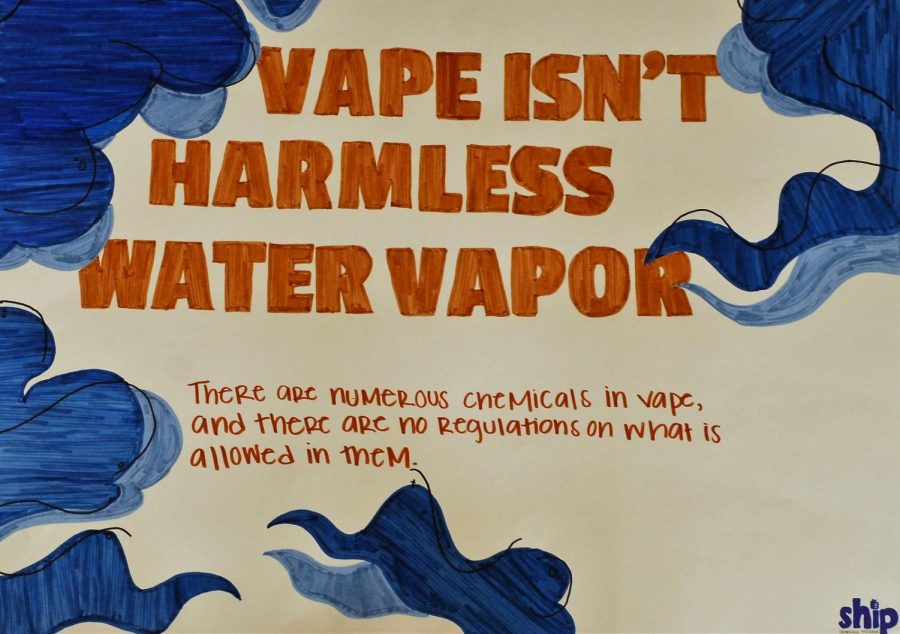 The common misconception surrounding vaping is that there is little to no harm associated with it, especially when compared to the commonly known dangers of traditional smoking. In reality, the truth is either unknown or flat out ignored by many among the growing number of our young population who are buying into the e-cig industry’s disgusting tactics of luring in teens. If one thinks that they can stick to only vaping while with friends and not have to do it elsewhere, that person may think more carefully after hearing that like traditional cigarettes, vaping poses a serious addiction threat because of the extremely addictive chemical, nicotine. Juul “pod mods” are the most prominent vaping device among our population, including our youth, composing about 72 percent of all devices sold across the industry. This market controlling device is especially dangerous because of its high nicotine content. One of these devices can contain as much nicotine as a full pack of cigarettes. Think about the chemicals coursing through a teen’s body if they consume a pod every few days.  These E-cigarettes  contain cancer causing compounds (carcinogens), and a recent study by the American Association of Pediatrics found significantly increased levels of carcinogens in the urine of those teens who have been vaping.

Vaping has widely been thought of as a method for smokers to ease their way out of their addiction of lighting up, but Yale University has found no evidence of truth in that theory. Rather, the college found that teens who use vaping devices are more likely to engage in the smoking of regular cigarettes later in life. This means the devices can almost act as a gateway drug for our younger people by establishing an addiction to nicotine. 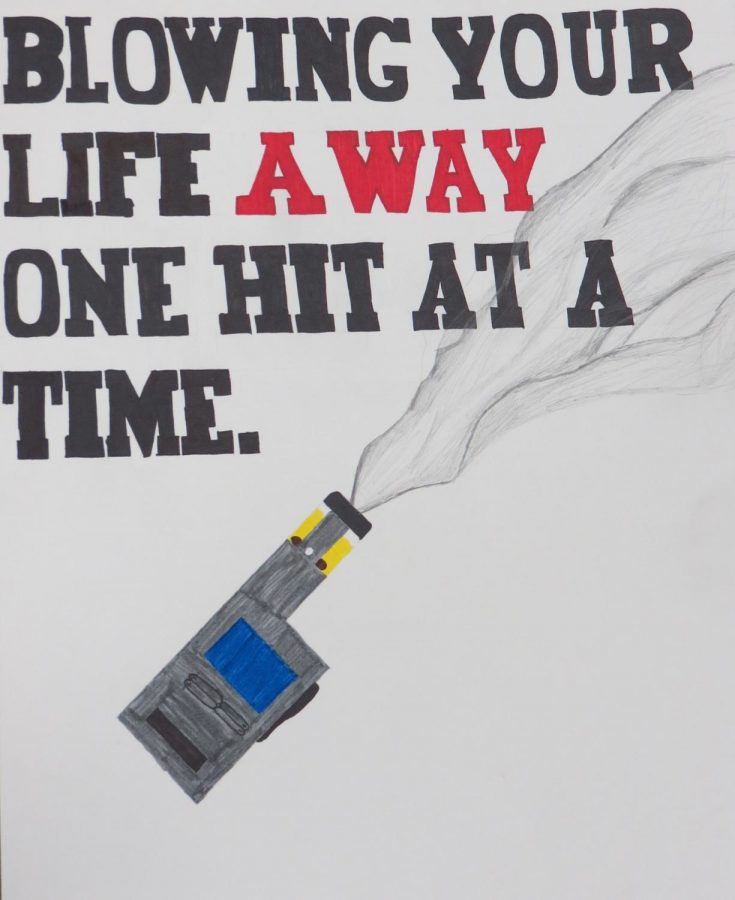 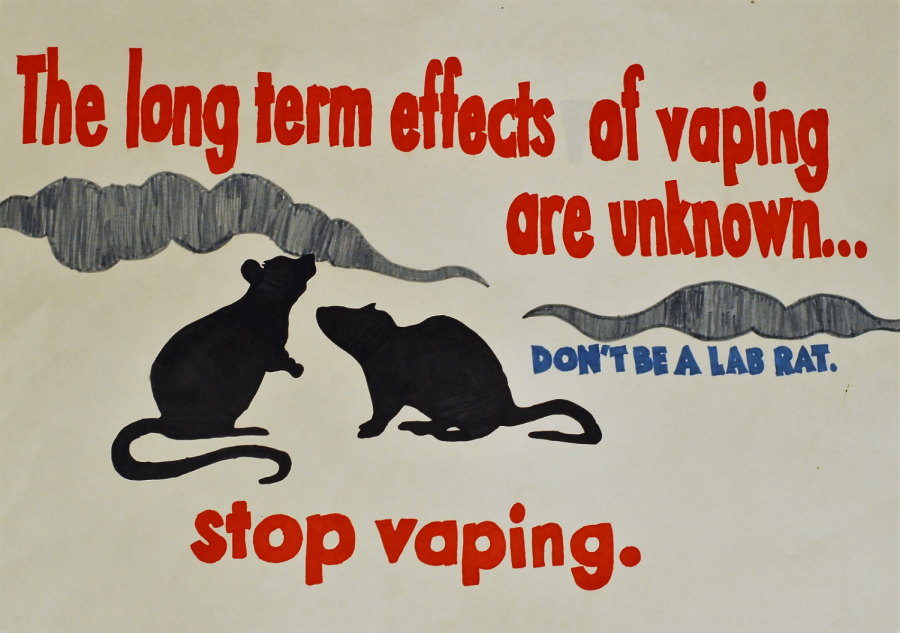 When we think of drug deals we often think of daring stunts, people wearing black hoodies, and cars meeting in a parking lot. Actually, that is not the case. High schoolers easily can get the items they need to vape, often times online or from older friends. Online, Rebecca S. Williams, MHS, PhD; Jason Derrick, MSW; Kurt M. Ribisl, PhD conducted a study in 2015 finding that  flaw in North Carolina. They asked 11 teens between ages 14 to 17 who didn’t smoke to try to buy e-cigarettes online from 98 of the most popular Internet vendors. Minors are not allowed to purchase e-cigarettes in North Carolina-but of the 98 orders, only five were rejected based on a failed age verification. Another route teens take is asking someone older to buy the items they need. Whether it is a pod, a pen, or flavored juices, more often than not someone will give the teens what they have been hoping for. The students at Cannon Falls High School are no different, most of them saying an older friend provided the materials they needed. High Schooler 1 said that “A couple friends just got me stuff for cheap since they said I was cool. I didn’t even know if I wanted to at the time but I guess I got addicted lol.” Another individual, High Schooler 3, said something similar to High Schooler 1 claimed that “Someone bought it for me for $50 for pen and juice.”  High Schooler 2 even compared getting vaping items to alcohol consumption stating that it is “Really easy to get them. It’s not any harder or easier than alcohol or beer.” The truth is vaping is far more common than we think. Acquiring the items necessary to vape is surprisingly easy for not only high schoolers at CFHS, but for high schoolers across the nation. 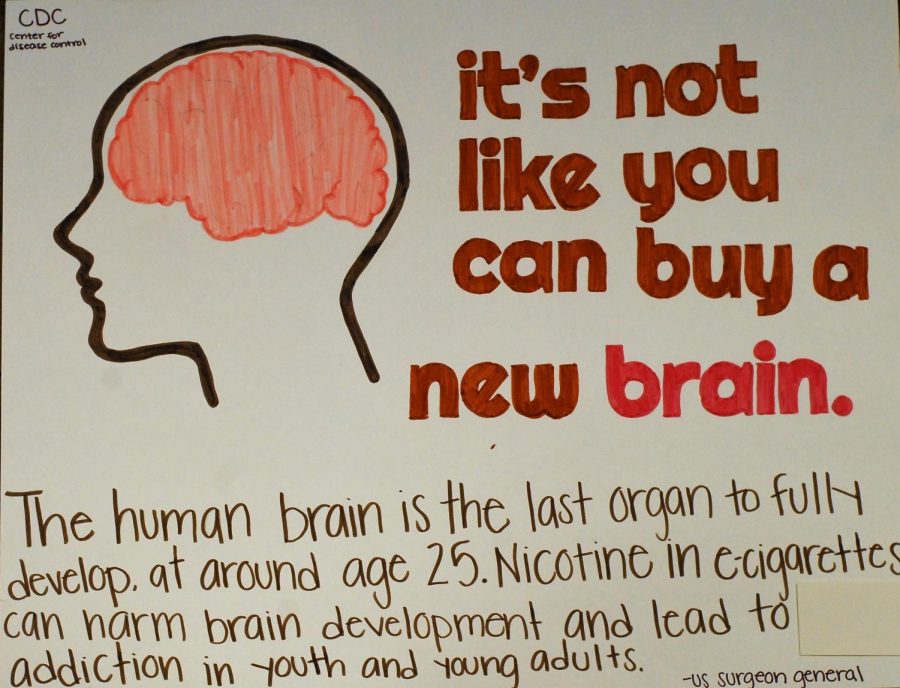 inspired by Center for Disease Control

Federal health officials have declared teen vaping as an ‘epidemic’ ever since vaping rates in young adults increased by more than 78 percent over this past year alone. Although there isn’t a clear-cut answer to getting to the bottom of this ‘epidemic,’ several ideas have been offered and are being considered. Students as well as parents need to be more informed about the negative impacts along with the repercussions of vaping. Currently, the Food and Drug Administration (FDA) is planning to further expand its anti-tobacco movement. This campaign is most notably known as “The Real Cost” which was first initiated to educate young adults. Through the use of posters in high schools and digital ads on social media platforms, the message that e-cigarettes cause health consequences is prompting teenagers to reconsider their decisions. A more assertive approach has also been proposed by the FDA as reported in a 2018 New York Times article. Steps to limit or ban the sale of products such as flavored e-cigarettes, menthol cigarettes, and flavored cigars are in the process. While the removal of these products from stores could take at least two years, the proposed ban will help push the anti-vaping movement in the right direction.