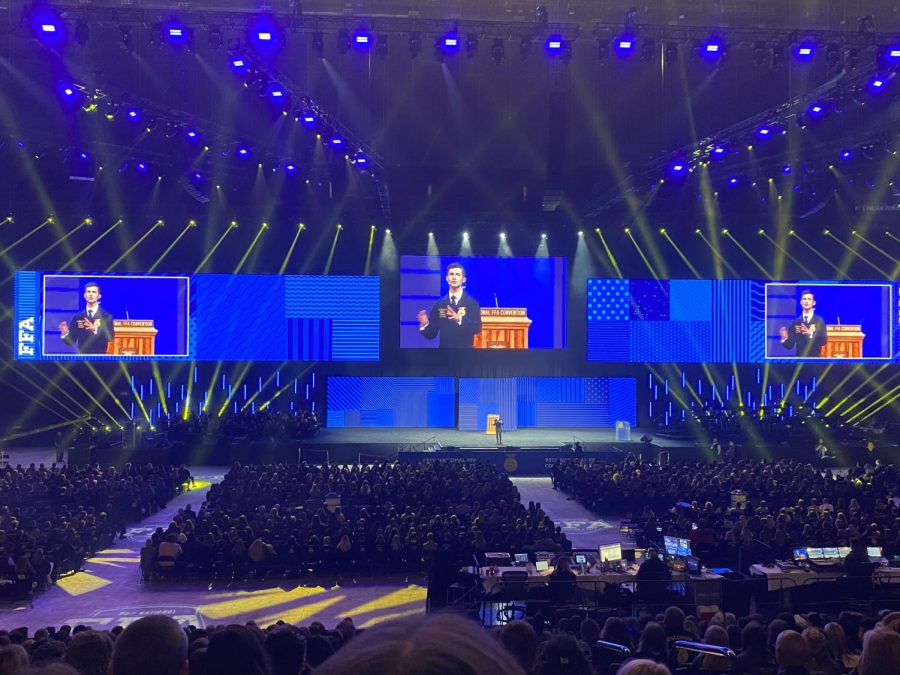 During the general session, the National FFA president addressed the stadium.

The Cannon Falls FFA recently took in the National FFA Convention in Indiana.

At 5:45 a.m. on October 25, 11 Cannon Falls FFA members and their advisor, Duane Pliscott, packed up their luggage and boarded a bus bound for Indianapolis, Indiana. They were traveling to the 95th annual National FFA convention, attended by over 65,000 people from all 50 states, Puerto Rico, and the Virgin Islands. While in Indianapolis, the students became more connected to FFA and agriculture by obtaining new agricultural experiences such as touring college campuses, farms, and the hub of one of the most popular equipment brands in America: John Deere.

The Cannon Falls FFA also traveled with chapters from Pine Island, Byron, Goodhue, and Zumbrota-Mazeppa. Over the course of the trip, the members bonded between chapters by talking on the bus, playing games, and attending activities in Indianapolis together.

The drive from Minnesota, through Iowa and Illinois, and to Indianapolis weren’t just hours without activity. Although many naps were taken and shows were watched, the advisors ensured that the students had activities to do. On the way down, the group stopped at the John Deere Pavilion in Moline, Illinois, where they were able to climb inside massive farm equipment, participate in interactive exhibits, and explore the extensive John Deere gift shop. After an hour of this, the group departed on their journey east.

A few hours later, the group stopped again, but this time at the University of Illinois, where they split into two groups. One learned how to age deer by looking at jawbones, while the other toured their extensive greenhouses and learned about the university’s agriculture programs. From there, they moved on to the final leg of their trip: Indianapolis.

The group arrived late in the evening and settled in for the busy days ahead.

The next morning, most of the Cannon Falls students were able to sleep in, whereas one did not. Cameron Addington, Minnesota state champion in Creed Speaking, had to wake up early to compete. Pliscott and Addington left for the FFA convention center, where Addington spoke against the best Creed Speakers from across the nation. “You walked into the holding room and there were people from all different states,” he explained. “It was interesting to see all the different people, the best of the best, from all over the country.” After he spoke, scores were tallied up and Addington earned a bronze rank overall, an incredible accomplishment.

The rest of the Cannon Falls students did not watch Addington compete; they instead toured RDM Aquaculture, one of the top shrimp farms in the world. There, the owner showed them around the numerous home swimming pools that she cleverly modified to be the perfect environment for raising healthy shrimp. She also shared that she has been using the same water for 12 years, as opposed to switching the water every few months with a typical filtration system.

Next, the group headed off to tour Purdue University for a brief lunch and a tour of the university’s agricultural programs and facilities. Because agriculture is such a wide-ranging subject, they had classes ranging anywhere from making alcohol to arranging bouquets of flowers.

By the time they were done with their university tour, the students headed back to Indianapolis for a concert consisting of artists Lauren Alaina and Jimmie Allen. Both artists have had popular songs on country radio. They performed their hits and several covers from other iconic artists such as Lady Gaga and Garth Brooks. After the concert concluded, the students were exhausted so they returned to their hotel and prepared for the early morning ahead.

On Thursday and Friday, the Cannon Falls FFA members spent their days exploring the convention expo. They had opportunities to chat with college booth attendants about various agricultural programs offered across the country, see job opportunities, buy merchandise from the official FFA store and other vendors, and – most people’s favorite – eat an unlimited number of scoops of Culver’s frozen custard.

While at the expo, the Cannon Falls students were given a checklist of things to do, including taking pictures with people from 25 different states, collecting freebies from booths, and doing activities such as Plinko or spinning a prize wheel. These activities got many people out of their comfort zones. Sophomore Isaac Rapp took advantage of the time to meet others: “My favorite part of exploring the expo was meeting people from all of the different states like California, Kentucky, and Florida. [I liked] going to the college booths and chatting to them about what they have.” The to-do list aided many in socialization and making brief connections with others.

In the evening on Thursday, the members went to a hypnotist show. They got to watch hypnotist Randy Andrews put 35 advisors and students fall into a deep, blissful, state of hypnosis and dance, sing, and say humorous one-liners from the depths of their subconscious. On Friday night, the herd of agricultural enthusiasts went to CINCH World’s Toughest Rodeo. While there, they saw bareback riding, saddle riding, bull riding, and trick rider Dusti Crain Dickerson. They were in for a good show, with most of the riders managing to stay on for over eight seconds, an impressive feat for such a difficult job.

Saturday was the FFA’s departure day; however, their trip adventures were far from done. On the way back, the bus took a different route, stopping in northwestern Indiana at Fair Oaks Farms. They learned of the farm’s system of voluntary milking, where the cows step onto a carousel, ride around while being milked, step off, and go back to their day. They produce truckloads of milk daily and ship it off to processing plants to be bottled and sold to consumers.

After the Fair Oaks Farms tour, they departed for home. They passed through Chicago to see the skyline, took time to decompress (and nap), and relaxed with their newfound friends. The students arrived back in Minnesota late into the evening, so they went home, with an abundance of fresh memories and experiences on their minds.