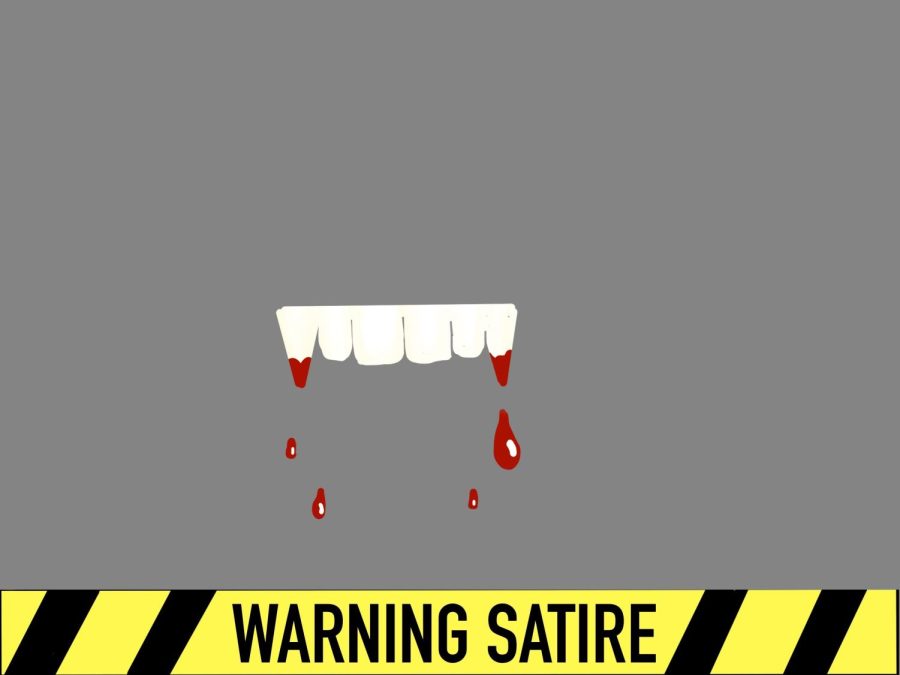 The Cullens come to Cannon Falls

Recently, the mysterious Cullen family moved to Cannon Falls, generating gossip and intrigue throughout the town. The Cullen family has stirred up drama involving their strange behavior, incestuous intrigue, conspiracies of vicious vampirism, and sightings of sparkling subjects which, by all accounts, perfectly defined the Cullen Clan. While this is likely all nothing more than idle small-town gossip, strange occurrences have begun to take place all over town. The Cullens’ arrival coincided with numerous mysterious and brutal animal attacks on humans. Surely these activities have zero correlation with each other, but the data left enough questions to warrant an in-depth deep dive into the Cullens’ elusive lifestyle. What will be uncovered: dastardly deeds performed by a debonairish devil, or just rampant rumors spread by idle adolescents?

The Cullen family started attending Cannon Falls High School Monday of last week. The family consists of Alice, Emmet, Rosalie, Jasper, and lastly Edward, who has proven to be very popular with the ladies despite constantly looking like he smells rotting fish. The Cullens’ adopted parents are Esme Cullen and Dr. Carlisle Cullen. Carlisle has recently been employed at Mayo Clinic, which is presumably why the Cullens moved to Cannon Falls. The Cullens first raised a few eyebrows by appearing to date one another, despite legally being siblings in the eyes of the American Judicial system. Alice and Jasper have been confirmed as a couple along with Emmet and Rosalie. Curiously enough, Edward is still single for anyone wondering. To continue the investigation, a few students were asked how they felt about these salacious statements. Beth Barrett, a fellow Cannon Falls Highschool student, stated that “It is weird, most definitely but our town’s nickname is practically Cousin Falls, so who are we to judge?”

Another student shared a very interesting tale about the Cullens. Kendall Lawless dished details about a recent sighting of Edward Cullen: “I was going for a walk in the woods when I saw Edward. He appeared to be sparkling in the sunlight. It was like he was made of diamonds.” This isn’t the only sighting of the Cullens shimmering in the sun, with multiple other students corroborating Kendall’s story. These common sightings have led to a constant herd of students interrogating the Cullens to learn their skincare routine. When Edward was asked to comment on this accusation he simply replied with “This is the skin of a killer.” No one ever knows what he’s talking about, and this occurrence was (shockingly) no different. Along with their perfect complexions, the Cullens’ gravity-defying hair also leaves many curious. The families’ weird relationship statuses, otherworldly good looks, and skin that looks like they bathe in the fountain of youth on a daily basis, have led students to come to one singular and absurd conclusion.

The Cullens are a family of vampires. This is reportedly the most absurd statement students of Cannon Falls High School have made to date. Who knows? Next week students could be claiming that the faculty are werewolves. To get to the bottom of this theory, Hannah Hjellming, the co-founder of the Cullens are vampires club, otherwise known as “Twilight”, was asked a couple of questions. According to Hannah, she didn’t believe any of the fantastical rumors until the day she was in the parking lot and someone lost control of their car. The vehicle almost hit her, but then Edward stopped the car. According to Hannah “He was on the other side of the parking lot, but in a blink of an eye, he was in front of me and stopped the car simply by putting out his hand.” This story sounds too wild to believe, but the hand-shaped indent left on the side of a high school boy’s pick-up truck says something different. The stories surrounding the Cullens- specifically Edward- keep getting crazier, as do the rumors surrounding the family. When asked about their theory, Bianca Caputo responded with “I think the Cullens are cult-like, and the adoption thing is just a ploy.” Bianca continues their outlandish theory by stating “All the kids are members and Carlisle, their dad, is some weird match-making cult leader. That’s why they are all dating.” Just when you think the speculations can’t get any wilder they somehow do.

It is unfair, however, to spread all of these malicious rumors without questioning the source first: Edward Cullens. First, he was asked how old he was. Edward responded saying he was “seventeen.” When asked how long he’s been seventeen, Edward simply said “For quite some time.” All that was truly uncovered was Edward Cullen’s inability to be the least bit helpful. After what felt like hours of tedious discussion, things finally started to progress. When questioned about his pale complexion and why he never seems to eat, Edward responded by stating “I don’t sleep and I only drink red blood- oh I mean Red Bull.” To be honest, this checks out. A lack of sleep and a caffeine dependency basically sums up an average teenager.

After gathering the evidence, talking with eyewitnesses, and interrogating the subjects, the case seemingly has been cracked. Edward Cullen is a… gamer boy. All the signs are there: being sleep-deprived, lacking proper nutrition, looking like he hasn’t been outside in years, and a complete lack of social skills. Yes, this is the only plausible explanation. The Cannon Falls LED is happy to report that there is no such thing as vampires and that everyone can rest easy once again. However, it is heavily recommended for no one to venture into the forest near the Cullens’ estate. It’s been rumored the animal attacks are really bad in that area.