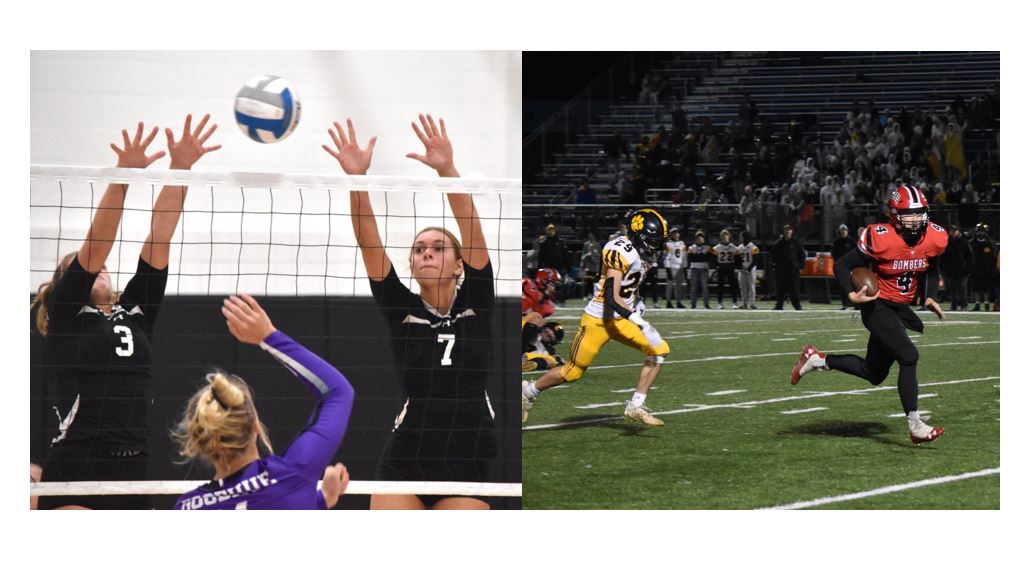 For the first time, two CFHS fall sports have reached the state tournament in the same year

Two paths to the state tournament

Setting a path to state

The Cannon Falls Bomber volleyball team is returning to the state tournament once again. After making history in the 2021 season by defeating Zumbrota-Mazeppa at sections and advancing to state, the Bombers once again proved themselves capable by beating the No. 4 seeded Caledonia Warriors.

Rachael Miller, a senior captain on the team, stated that, “Every aspect of our team picked up, especially blocking. Playing each game like it was our last showed a noticeable difference in the way we competed. Everyone wanted to win and it showed.”

Although they dropped the first set 18-25, the team came back fighting by taking the next three sets 25-12, 25-21, and 25-21 to secure the section final title. Madison Burr led in kills, tallying up a total of 18. Miller led with 3 ace blocks and a total of 6 blocks. Finally, Kyra Schoenfedler led in digs with 23.

While Bomber fans were left stunningly surprised that the Cannon Falls achieved back-to-back state tournament trips, various players on the team knew that a trip to state was in the works much earlier in the season. Many players believed there were multiple turning points within their season that allowed them to accomplish this great achievement.

“I was in shock,” stated senior captain Elle Lind. “I knew our team could do it again if we gave our best effort, but going back to state for the second time in school history still seems kind of unreal.”

Lind went on to explain that a crucial turning point in the Bomber volleyball team’s season that gave them the momentum to succeed in playoffs was their game against Byron in late October. Lind shared that, “After our loss against Byron, I think our team came to a realization that we can’t play as individuals.” Following the loss, the team began doing team building exercises to build their team chemistry. “I truly believe that we needed that loss to open our eyes and show us we need to be a team on the court,” Lind admitted.

After our loss against Byron, I think our team came to a realization that we can’t play as individuals”

Senior captain Kyra Schoenfelder used the word “unbelieveable” to describe her reaction of going to state for only the second time in Bomber history. She expressed that being able to prove everyone wrong and win the section championship was extremely rewarding, especially when many doubted their ability.

“I knew we had the capability to go to state again when we beat Kasson-Mantorville, a top ranked team in class AAA,” stated Schoenfelder. The match went to 5 sets, but the Bombers came out on top. The girls showed all fans what it looks like to play with grit and determination as a team. This was also shown during the section final game against Caledonia, who are strong both offensively and defensively. Schoenfelder described the outcome of the match saying “Caledonia truly made us work for the win.” She also talked about how surreal it felt to be section champions again and couldn’t be more excited for another chance at the state tournament.

Kallie Johnson, a junior on the team, also shared her thoughts. “I was so pumped, I couldn’t stop smiling,” she expressed. “It felt uplifting to see all the fans to cheer us on and it feels good that we make them proud,” Johnson added, as the team achieved their final victory to advance to state.

Johnson said, “I think a turning point in the season was our quarterfinals match against Pine Island. It was our first game at the Civic Center and made playoffs feel real.” Losing that first set against the Panthers made the Bombers realize they had to up their game for the sets to come. Johnson complimented a couple of the Bombers strengths that allowed them to achieve their goals. “Our communication was an important aspect to our game and having the mindset of defense first.” As the season is coming to a close, Johnson is looking forward to all the memories she will soak up with her team this week.

When asked about going to state for the second year in a row, head coach Melissa Huseth exclaimed, “This year, our team worked even harder to earn that repeat trip to state and show how strong our program is.” Huseth said she knew early on the team had high potential. She described the playoff matches at the Civic Center as defining moments because, “Our entire team was determined, aggressive, and disciplined to play their role to the best of their ability.”

Finally, the girls’ greatest strength is playing well as a team. Huseth proudly stated, “We have multiple attackers, tenacious defense in the backcourt and our blockers have come alive!” The girls push each other and play their role to succeed together. Huseth emphasized, “To say that I am happy and humbled by this team would be an understatement.”

We have multiple attackers, tenacious defense in the backcourt and our blockers have come alive”

Despite facing various ups and downs during their season, the Bomber volleyball team experienced crucial turning points that allowed them to accomplish extraordinary victories throughout playoffs. The Cannon Falls Bombers received the number 2 seed for the state tournament and are scheduled to play the unseeded Pipestone Arrows on Thursday, November 10 at 3:00 PM at the Xcel Energy Center.

The score read a stunning 50-6 as the final whistle blew, signaling the end of the fourth quarter. The Bomber Football team is advancing to state after crushing the Plainview-Elgin-Milville Bulldogs. After suffering a catastrophic loss to the Bulldogs last year in the 2021 section finals, Cannon Falls got a chance to redeem themselves— and redeem they did.

Head Coach Dan Meyers stated, “We’ve been working hard all season and getting better each week, so we knew we had the potential to blow PEM out.” The Bombers played them and beat the Bulldogs in the regular season, but the game was much closer. “In the section championship game the guys played amazingly well, and we were able to both get big plays on offense and shut them down defensively,” Coach Meyers explained.

In the section championship game the guys played amazingly well”

The Bombers came into the playoffs 7-1, with a loss against Rochester Lourdes. “The 22-25 loss to Lourdes was definitely a turning point for us. Because of the close loss, the guys learned that every play matters and that we are going to have to play with grit and work hard to have success,” Coach Meyers emphasized.

Senior captain William Regenschied agreed that their loss to Lourdes was eye opening. “It showed us what a loss felt like and just helped us improve and everything we needed to improve on,” he said.

Another senior Captain on the team, Colton Otto, shared how adaptable the football team is— which can be crucial coming into the state tournament. “For me, one of the turning points for our team was our regular season game against Pine Island. We had 4 or 5 starters sitting out that game with various injuries. Our guys stepped up and proved themselves putting up 80 points on the scoreboard. I think that really showed what our team as a whole is capable of and how much versatility and depth we have,” he commented.

Despite various ups and downs throughout their season, the Bomber football team is ecstatic about being crowned section 1AAA champions.

“I am extremely pumped to be going up to state,” shared senior Isaac Fehling. “We haven’t always gotten into the state tournament so I’m just really happy we are in it.” Fehling went on to share about his confidence in his team regarding the state tournament. “I am always confident in our ability to win, but after beating Caledonia in the regular season, it just felt like we could beat anybody anywhere,” he admitted.

The Bombers picked themselves up after their loss to Rochester Lourdes and never looked back. The game is scheduled take place at the football field in Hastings, a neutral location. They will face Watertown Mayer on November 10 at 7:00 PM.